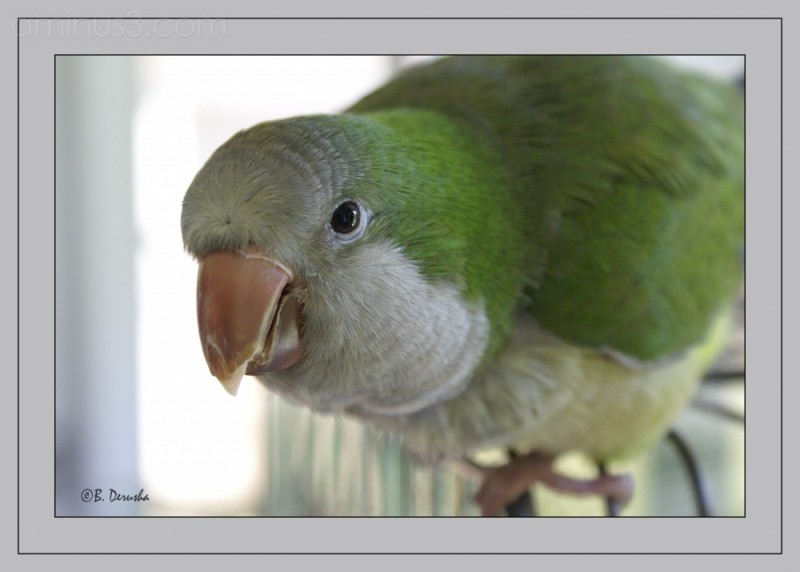 Previous Next
← previous day next day →

Posted by Barbara (Florida, United States) on 29 March 2008 in Animal & Insect and Portfolio.

20 years ago Quaker was found in a parking lot. Obviously someone's pet his clipped wings had just started growing back giving him enough flight to escape.
A month after coming home with me he began to say his name Quaker.
Before that I never considered myself a bird person. Life has never been the same since.
Quaker is a character, a strong personality. His favorite food is chicken, tuna, pasta and eggs, to name a few.
Today was bath day and time to clean his cage. With our pleasant weather Quaker spent his afternoon on the screened patio listening to the birds outdoors.
There are large communities of these Quaker parrots in Florida, and in some Northeast states. They build very large nests usually consisting of 3 rooms, a bird condo.
Also known as Monk Parakeets, in some states they are illegal since they can destroy crops.

Fine detail and fabulous composition. This is excellent.

Really nice portrait of Quaker. I like the way you used the deep of field

@Laurent: Thank you. Quaker loves cats too like the one in this adorable photo: http://latentation.aminus3.com/

You have captured the pose really well. There is an amazing amount of detail coming through in such a small image size - are you using a special technique to downsize your images?

@dobbino: Very nice comment you have made. No special technique, although sometimes rather than stand fixed and adjust my lens to focus I lean into or back with my body until focused.
After loading I was pleased with how it appears Quaker stuck his head through the DOF into a window of focus. There was no cropping or processing other than the added border. Thank you.

very nice portrait :) with the best focuss and beauty colors ...... thanks.

@Eleftheria, 9 years old,: I know you like animals too. Thank you for commenting.

@ally (:: He has a cute personality too! Thanks Ally.

I must say I am not a bird person either, but you have captured this "member of the family" wonderfully. I almost want to reach out and pet his head!! Great colors, textures, and DoF. Well done.

@Chris: Having a bird like Quaker will change your entire perspective of having a bird. He is very sociable.

You sure did pick my favorite color!

Quaker seems to be talking to you! You captured him very well. Fine shot!

@standley: Quaker is always communicating with me. He use to say words and still knows them but he has really bonded with me and taken on a roll of a baby. Thank you for your comment.

Quaker, you are beautiful...tell him I said so okay Barbara?

He's a cute one, and photographed very well indeed. We always had parakeets (along with dogs) when I was coming up, and they'd talk up a storm. One had the habit of sounding like he was dialing the phone before speaking, and mimicking it's ring before saying "hello". Seems once they start speaking it's hard to shut them up! Lots of company though. I wasn't aware of their nest building habits, or this species were so common in your area. Interesting, thanks for sharing.

very nice portrait
great shot
(I'm a bird personn ! Actually I have a parrot but few years ago I had two)

What a beautiful portrait of Quaker! I also love the story of how he came into your life. I'm so glad you found him. Bet you never thought you'd still have him 20 years later. I never considereed myself a bird person before we got our Qauker, Trudy. I was always filled with equal parts fascination and fear when it came to birds. Now I can't imagine my life without her. I never dreamed something that weighs less than a pound could have so much presence and personality! We actually have large communities of quakers living in Chicago--Hyde Park and surrounding suburbs. It's amazing that these bird have learned to adapt to such cold weather climates. Once again...beautiful shot!

@Claudia: Thank you so much for your comment on Quaker (the trouble maker) You said the exact words I use to always say "I never considered myself a bird person". I love all animals but never thought having a bird would be as compatible as having a dog or cat. I am not certain about the blue Quakers like Trudy but I have read stories about a flock of green parrots (Quakers) getting loose at JFK airport after being transported from South America. That is how colonies in the northeast started. There was a story about them on PBS. A woman use to walk her dog, either Rottweiller or Doberman or similar dog and the Quakers would terrorize him, he was afraid of them. It is strange how they adapted to cold weather. The large colonies that were common, at least in this area do not seem to be around anymore. Nests that were everywhere are no longer. I do wonder if something was done to remove them from due to their large population. Although one was at my feeder a few days last week. Hopefully a nest is nearby. I really have to chuckle at the similarity in your comments. Enjoy Trudy for years to come.